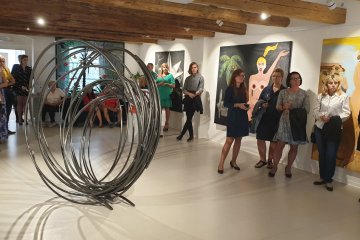 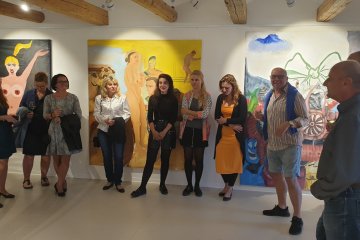 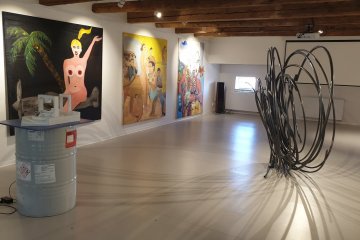 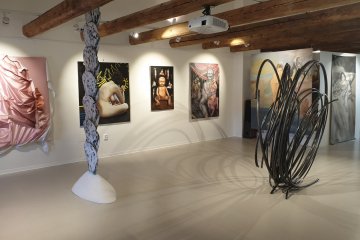 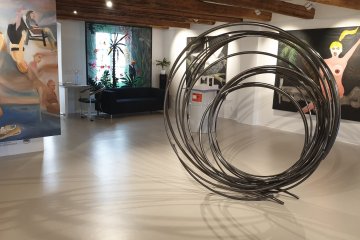 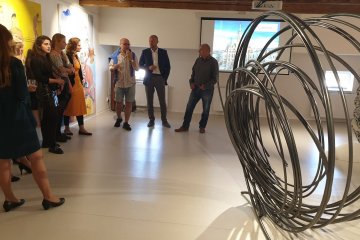 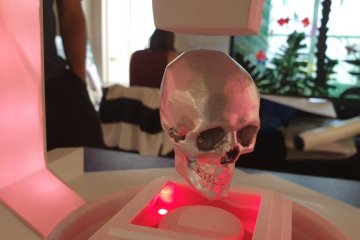 The exhibition in Broumov, accompanying the Sculpture Line sculpture festival, is called Girls, Girls, Girls & Boys. And really … it exhibits works of girls and girls and girls - they exhibit paintings – as well as works of boys – who in turn exhibit spatial or sculptural works. The girls in plural are girls or women - trainees of drawing and painting studios of Jiří Petrbok, Marek Meduna and Josef Bolf at the Prague Academy. The boys exhibiting there have already graduated from the sculpture studio of Michal Gabriel in the Brno FAVU (namely Jan Dostál and Tomáš Pavlacký) and from painting studio at The Hague Academy (namely Martin Gabriel, who, though a painter, does not deny his father Michael's sculptural genes in the Broumov exhibition. Boys exhibit abstract sculptures: Honza Dostál artfully drawn lines, Tomáš Pavlacký, who has managed technological achievements of 3D printing with certain brilliance, prints composite steles, and Martin Gabriel materialized for our physical world what some of us are looking for in dreams and others in computer games. And how about the girls? They seem to take it a little more seriously. But there is no need to worry about them either. It is a quite cohesive group; there is a certain permeable bond between girls; they exhibit a similar relationship to art, to the world

even to herself, although they are authors from various studios and school years. Still they are so close to each other in many ways .... Certainly, with a trembling relationship to a somewhat broken, hurtful, painful and yet colourful reality. They explore the possibilities their own identity, their relation to their bodies, people, space, where they move, as well as the dark corners of their uncovered souls. Themes are open, accommodating, narrative and, multi-layered. Also, the formal side is openly spontaneous, open, often eloquently figurative, even in cases where they do not paint or draw, as is the case in the assemblage fabric collages of the body surface fragments of the already mentioned Lucie Králíková. It seems that the sincerity has been becoming almost directive, painting right now is so up-to-date and imaginative with an uncomplicated handwriting. The girls thus bear the "weight" of the world, while the boys play and will continue to play. But each of them whether girls, or young women, boys, or young men, tell their stories through their works; these stories have been cast into a fascinating world that they discover with the same intensity that the world is discovering them. Are we entering a new era?